Darkness welcomes me as I embrace the choices that I have made. With fire in my eyes and revenge having already condemned my soul, Salem has created a demon. Born from the ashes and convicted with no sin, I was forced to reign in the underworld while I waited for the right time to avenge my wrongful death.

The cost was of no concern, until I met my match in a ghost, 300 years later. He had one job; collect the soul and release it to me. That’s it.

Timothy carried his own past into the dark side. With a conscience and a fondness for humans, I questioned his loyalty as I protected my secret. Being forced to collect a soul in a human form, I was already at a disadvantage and I didn’t want to admit that I needed his help.

Emotionally charged and the risk of humanity regaining its control over my tie to Hell, I was running out of time. The secrets that I buried were my weakness and Timothy was more than prepared to destroy me with anything that he could uncover.

He had the ability, the strength and the time to do it. What he didn’t have was the one thing that would fix everything he’s been chasing… my blood.

Purchase The Blood of Abigail Today!! 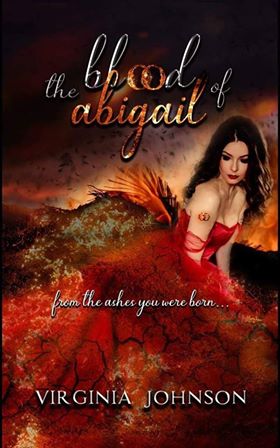 Check out Virginia’s other novels here.

To find out all things Virginia, check out her website.